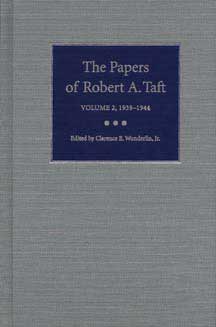 The Papers of Robert A. Taft

This third volume in the series documents Robert A. Taft’s experience through World War II and his early postwar years. After winning a tough reelection battle as senator from Ohio in 1944, Taft move steadily upward in the leadership ranks of his party and assumed a preeminent position among the bipartisan group of conservatives that increasingly dominated Congress.

This volume continues the contribution that The Papers of Robert A. Taft provides to the study of United State political and diplomatic history, Ohio history, and conservative political theory.

Clarence E. Wunderlin Jr. is professor of history at Kent State University. He is the author of Visions of a New Industrial Order: Social Science and Labor Theory in America’s Progressive Era and coeditor with Larry I. Bland and Sharon R. Ritenour of The Papers of George Catlett Marshall, Volume 2.