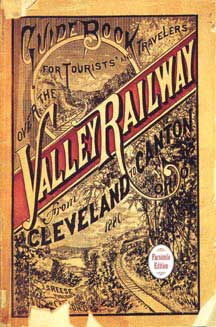 Guide Book For the Tourist and Traveler over the Valley Railway

Founded in 1871 by a group of entrepreneurs from Cleveland, Akron, and Canton, the Valley Railway paralleled the Cuyahoga River Valley, stretching from southeast Cleveland to Akron and then on to Canton and Valley Junction in Tuscarawas County. The Railway filled a need in the region by providing an important passenger rail link among the three cities and provided direct access to the coal fields in Stark and Tuscarawas Counties, supplying coal for Cleveland’s iron mills and other growing industries. The Railway began operation in 1880, continued service until 1962, and was revived in the early 1970s. In their new Introduction, historians Sam Tamburro and Juliet Galonska provide a corporate history of the Valley Railway, a thorough examination of the impact of the Railway on the rural communities through which it passed, and a discussion of the brief but vital role it played in tying together the regional “metropolitan corridor” of Cleveland, Akron, and Canton, all complemented with photographs of the region today.