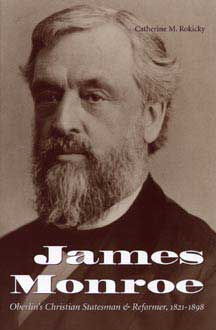 Catherine M. Rokicky explores this abolitionist politician’s years at Oberlin during the antebellum period, as well as his travels that would put him in contact with important men such as Frederick Douglass; his election to the Ohio House or Representatives from 1856 to 1859 and the Ohio Senate from 1859 to 1862; his work with Jacob D. Cox and James A. Garfield on behalf of black rights (they became known as the Radical Triumvirate); his term as president pro tem of the Ohio Senate; and his appointment by President Lincoln as U.S. consul at Rio deJaneiro. Monroe was later elected to the United States Congress in 1871, where he served for five terms. Following his retirement from Congress in 1881, he returned to Oberlin where, as an endowed professor of political economy and modern history, he influenced students who would become important progressive reformers.