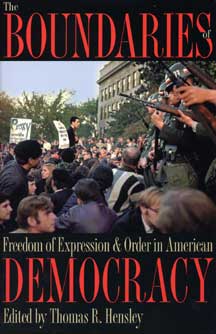 The Boundaries of Freedom of Expression and Order in American Democracy

On Monday, May 4, 1970, members of the Ohio National Guard, called onto the Kent State University campus to quell antiwar demonstrations, fired 61 rounds into a group of students protesting the U.S. invasion of Cambodia and Guard presence on campus.  Thirteen seconds later, four students lay dead and nine were wounded.

After decades of controversy surrounding the May 4 commemoration, the University moved in a new direction, choosing to use the 30th anniversary as an opportunity to recognize the past and embrace the future. A major component of this was the establishment of an annual scholarly symposium to focus on the great issues of American democracy.

The Boundaries of Freedom of Expression and Order in American Democracy is the product of the first symposium, which explored the limits of freedom of expression in American society as they apply to business, education, media, law, politics, the Internet, and other venues.

Thomas R. Hensley is professor emeritus of political science at Kent State University. He chaired the university’s first Symposium on Democracy, an academic conference created in commemoration of May 4, 1970, and edited the inaugural volume of the Symposium on democracy series, The Boundaries of Freedom of Expression and Order in American Democracy (The Kent State University Press, 2001).