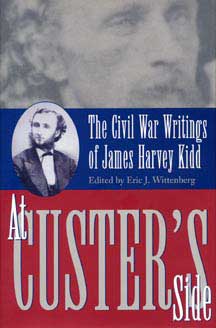 During the Civil War, James Harvey Kidd fought alongside General George Armstrong Custer as a member of the 6th Michigan Cavalry—the Wolverines. After the war, Kidd served as brigadier general in the Michigan National Guard and, upon returning to his civilian career as a newspaperman, published two newspapers in his hometown.

Eric J. Wittenberg presents many of this newspaperman’s captivating writings in their original form. Kidd wrote eloquently about his Civil War experiences, especially his service with Custer. His speech given at the dedication of the Custer monument in Monroe, Michigan is particularly important, as it provides readers with one of the first revisionist views of the tragedy that befell Custer at Little Big Horn.

Much like Wittenberg’s first book of Kidd’s writings, this latest collection offers insightful, articulate, and entertaining commentary on what it was like to serve in the Civil War and with “the boy general.”

Eric J. Wittenberg is a lifelong Philadelphia Phillies fan and native of southeastern Pennsylvania. Having grown up in the early 1970s, he understands losing baseball teams. He is a lawyer in pri- vate practice and an award-winning Civil War historian. He and his wife Susan reside in Columbus, Ohio, where he struggles to follow his beloved Phillies.