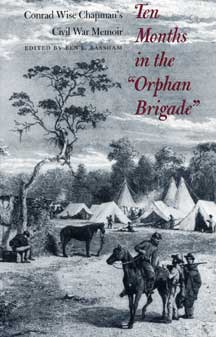 Ten Months in the "Orphan Brigade"

Conrad Wise Chapman was born in Washington D.C. in 1842. In 1848, his father left his career in America and took his family to Europe, settling ultimately in Rome. The younger Chapman could have looked forward to a productive life as an expatriate painter in Italy. But, when word of the first battles of the Civil War reached Rome, he ran away to enlist in the Confederate army. Thus began the extraordinary military career of a highly trained and talented painter who would dedicate his heart and soul to the Confederate cause not just until the end of the war but for the rest of his life. Chapman’s memoir, written from memory in 1867 and aided in part by his extensive correspondence with his family, alternately sparkles with humor and wit and bristles with a passionate hatred for Yankees. He recalled his soldiering days with nostalgia, for he suspected those months in the army might have been the high point of his life.