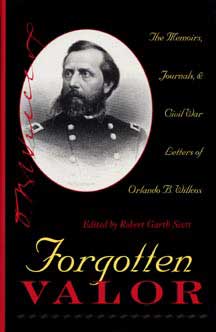 The Memoirs, Journals, & Civil War Letters of Orlando B. Willcox

The papers of Major General Orlando Bolivar Willcox, one of the most prominent division commanders in the Union army, were recently discovered locked in a trunk in a Washington, D.C., attic, virtually untouched since his death nearly a century ago. Editor Robert Garth Scott has sifted through what is arguably the largest collection of Civil War-related material to surface in fifty years. From his childhood in Detroit through his cadetship at West Point, his service in the Mexican, Seminole, and Civil Wars, and his post-Civil War experiences in the West, Willcox’s story is published here for the first time.