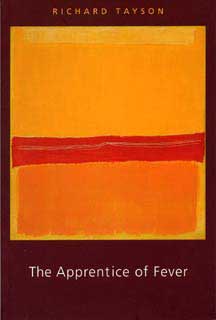 The Apprentice of Fever

Winner of the 1997 Stan and Tom Wick Poetry Prize “The Apprentice of Fever is a brilliantly corporeal first book…rooted in the day-to-day life of a man implicated in the AIDS epidemic, living on the edge, crossing, transforming and transgressing boundaries, always, always paying an extreme and active attention, which is the apotheosis of compassion, which is an act of love…” “Tayson’s voice is unmistakable: direct, witty, passionate and desperate, in poems with the crucial acid to etch themselves into the reader’s consciousness.” —from the Introduction by Marilyn Hacker, Judge

Richard Tayson’s other awards include a New York Foundation for the Arts Fellowship, Prairie Schooner’s Edward Stanley Award, and a Pushcart Prize. Tayson’s co-authored book of non-fiction, Look Up for Yes (1998), appeared on bestseller lists in Germany, and has been included in Reader’s Digest’s Today’s Best Nonfiction in the United States, Germany and Australia. His second book of poems, The World Underneath (Kent State University Press, 2008), was released in 2008. Tayson lives in Queens, New York.