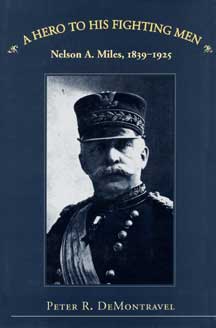 Hero to His Fighting Men

Nelson A. Miles began his military service as a volunteer officer in the Civil War. He later earned the appellation “the idol of the Indian fighters” and capped his controversial career by serving as Commanding General of the Army from 1895 to 1903.

Without the benefit of a college education, Miles attained the rank of major general of volunteers two months after his twenty-sixth birthday. At the close of the Civil War, he was Jefferson Davis’s military jailer, then served with the Freedmen’s Bureau in North Carolina. On the frontier, he won a series of victories against the Kiowa-Comanches, Sioux, Nez Perce, Bannocks, and Geronimo’s band of Apaches. His skillful management of the Messiah outbreak of 1890 ended the Indian Wars. Miles also commanded the Army during the Spanish-American War and was involved in the late nineteenth-century Army reforms.

During his long and distinguished career, Miles made numerous enemies, including Theodore Roosevelt. Peter DeMontravel contends that the comments made by these enemies influenced the way historians have viewed Miles’s career. This reassessment of that career restores him to a degree of prominence.

Peter R. DeMontravel received his Ph.D. in history from St. John’s University and is an instructor in the School of New Resources at the College of New Rochelle. His essay, “General Nelson A. Miles and the Wounded Knee Controversy,” appeared in Arizona and the West.

“The result of excellent and wide-ranging research, this is the best and most thorough biography of General Nelson Miles available. It will be a significant contribution to the study of American military history, especially for the period 1865-1903.”—Joseph G. Dawson, Texas A&M University

“General Nelson A. Miles was an important figure who has been largely overlooked by biographers. His most significant contributions occurred during the Indian campaigns after the Civil War, and this study provides context for this period of his career. As well, DeMontravel here presents a thorough treatment of Miles that solidly defines the man and his times.”—Jerome A. Greene, author of Yellowstone Command: Colonel Nelson A. Miles and the Great Sioux War, 1876–1877