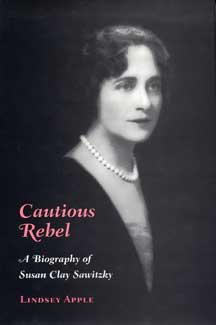 A Biography of Susan Clay Smitzky

“Willa Cather wrote that ‘the history of every country begins in the heart of a man or a woman.’ This is the story of the heart—and of the mind—and the conflicts within. It is the country’s story. It is our story.” —James C. Klotter, Director and State Historian, Kentucky Historical Society

“Lindsey Apple splendidly reconstructs the life of a woman who was at once ordinary and exceptional. His biography is certain to inform, engage, and challenge.” —Thomas H. Appleton, Jr., editor of The Register of the Kentucky Historical Society

“This well written and meticulously documented biography is a case study of how regional heritage, family, and self can combine to restrict the talent and success of an individual. A hostage to the past, Sawitzky epitomizes the American ‘every woman,’ who struggles, compromises, and survives.” —Carol Crowe-Carraco, Western Kentucky University

“Cautious Rebel, based upon extensive research in the Susan Clay Sawitzky papers as well as other Clay family papers, will be a significant contribution to historical and literary scholarship and should have an appeal to historians and specialists in American literature—especially those with an interest in poetry.” —Nancy Forderhase, Eastern Kentucky University

Susan Clay Sawitzky (1897-1981) was born into a traditional Kentucky family dominated by the lingering renown of its patriarch and Susan’s great-grandfather, Henry Clay. Family and community expected Susan to take her place on the pedestal of Southern womanhood, but Susan reached maturity at the height of the first women’s movement and heard the promises of that movement. In the late 1920s she attempted to live independently, the startled everyone by eloping and moving to New York City with William Sawitzky, a divorced Russian emigré.

For sixty years Susan Clay Sawitzky struggled against the values assimilated in her youth, ideals shared by her Old World husband and American society in general. She wrote poignantly about confinement and freedom in the privacy of her study and published a small amount of poetry and art history. But she was not an exceptional woman; she could not take the risks necessary to achieve the degree of success she coveted. The detailed record she left reveals the forces, both subtle and complex, that compromised her dreams and accomplishments. Lindsey Apple employs nearly seventy years of Susan Clay Sawitzky’s personal letters and poetry to reconstruct the world of a woman seeking modernity with “the millstone of tradition” upon her shoulders.

Women’s studies has been inclined, unintentionally, to create a new elite. Historians have preferred to emphasize progress, particularly when created by women themselves, and biographers have chosen strong, successful women. But the vast majority of women were not activists. Susan Clay Sawitzky’s life shows that tradition and modernity can and did exist simultaneously, creating tremendous complexity in the lives of individuals. Her experiences suggest that compromise may result as much from fatigue as from lack of desire or courage.

Lindsey Apple is a professor and chair of history at Georgetown College. He is editor, with Ann Bevins and Frederick Johnston, and one of the authors of Scott County: A History and has published articles in The Register of the Kentucky Historical Society and other journals.