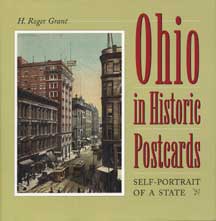 For a century Americans have been purchasing picture postcards.  Ohio in Historic Postcards presents 208 examples of postcards from early twentieth-century Ohio and places them in their historical context.  At the World’s Columbian Exposition in Chicago in 1893, the first picture postcards portrayed a range of the fair’s attractions.  From that beginning postcards took the nation by storm.  The efficiency of the Railway Mail Service together with the sparsity of telephones made the cards a cheap, reliable, and convenient form of communication.

The Golden Age of the picture postcard coincided in Ohio with economic growth and t he making of the modern state.  Ohio ranked fourth in population and fifth in manufacturing, and people were optimistic about the future.  It wasn’t until the First World War that the fad began to fade.  The somber mood brought by the war made the cheerful pictures seem frivolous, and commerce with Germany, the major supplier of cards, was disrupted.

The first section of Ohio in Historic Postcards describes the rise of the picture postcard and its Golden Age and gives a sketch of turn-of-the century Ohio, a burgeoning economic power.  Section two is an album of postcards divided into ten sections:  Ohio Landscapes, Commercial Structures, Public Buildings, Monuments and Memorials, Religion, Education, Transportation, Industry, Ohioans at Work, and Ohioans at Play.  Each unit of postcards begins with an overview of Ohio’s progress in the areas depicted on the cards.  H. Roger Grant effectively illustrates the importance of the cards both as artifacts and as images and ties them to the story of Ohio.