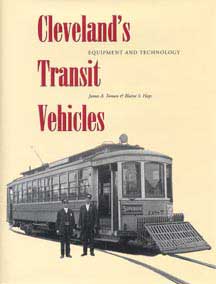 From the beginnings of the horse car era to the “sardine days” or World War II, Cleveland transit operators provided high quality service while introducing procedures and equipment that were widely copies elsewhere.

The social and political aspects of Cleveland’s public transportation history are the subject of this companion volume to Horse Trails to Regional Rails.  The focus here is on the technological aspects of the system.

From the start of street railway operations in 1859 until the end of the surface electric era in 1963, the city was crisscrossed with hundreds of miles of track and overhead wire, and with thousands of poles to keep the overhead wire in place.  Thousands of streetcars, and then thousands of buses, carried millions of passengers.  The old Cleveland Transit System alone carried over 493 million passengers in 1946, and that total does not reflect the ridership of various suburban carriers.

In this volume are described and listed both the early vehicles and the modern ones.

It is not so much a nostalgic look at earlier times as it is a description of how ongoing developments in the industry changed the way the public transportation system carried out its mission.  In Cleveland this was accomplished with rare efficiency and with good speed.

The authors confess, whoever, to one nostalgic piece.  In 1965, Jack Ainsley, a Cleveland rail fan, wrote his reminiscences about taking the streetcar through the Detroit-Superior Bridge subway.  His narrative is in part 3.  His recollections help from the technological focus of this volume and give it a more human face.