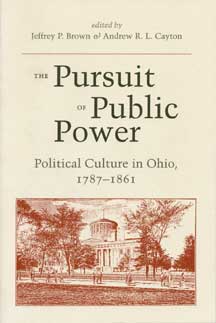 Many of the political institutions that would dominate 19th-century America (and the Midwest in particular) originated and first evolved in Ohio. The Pursuit of Public Power explores the origins and nature of political culture here from the American Revolution until the Civil War. Twelve essays examine topics such as voting practices, the role of the state in national economic development, the relationship between religion and politics, the rivalries between individual political leaders and between communities competing for social and economic dominance, the impact of slavery on politics, and the development of stable political systems within a rapidly changing state. Representing the mature assessments of historians who have long studied antebellum politics, this collection will appeal not only to readers interested in Ohio history, but also to those interested in 19th century American politics.