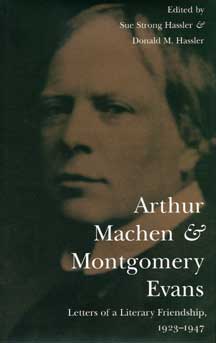 Arthur Machen (1863-1947), who achieved significant fame in the 1920s, was a general man of letters with echoes of Samuel Johnson, an important influence on later fantasy writers from H. P. Lovecraft to Ray Bradbury, and a great adventurer of the spirit. Montgomery Evans II, a wealthy book collector and one of a small circle of Machen’s friends and benefactors, carefully collected and mounted in two notebooks nearly 200 letters he had received from the Welsh writer. Sue Strong Hassler and Donald M. Hassler have arranged and edited material from the notebooks to reveal the wonderful story of a literary friendship between an old master, who knew he was a “master” and who continually valued what he called the “ecstasy” of fine writing, and a would-be writer and believer.

From the 1920s on, literary materials by Machen had been popular with book collectors. Machen wrote an enormous number of letters, like these to Evans, in which he commented on literature, history (he was fascinated with  the 18th century), cultural and political events in England and America, publishing, bookselling and booksellers, his own writing, travel, and food. Machen discusses many literary figures, including Robert Hillyer, Dorothy Parker, Gilbert Seldes, H. L. Mencken, Sylvia Townsend Warner, James Branch Cabell, Holbrook Jackson, George Lacy, Robert Louis Stevenson, Sinclair Lewis, Rudyard Kipling, and Vincent Starrett. The fullness of his correspondence provides a fascinating insight into the literary life of Machen and his circle, which flourished around London from the twenties through the Second World War.  Machen’s work is important not only as a source of ideas about writing but also as a reflection of literary changes and as the critical foundation for modern fantasy.

The Hasslers, in their analyses of the letters, explore Machen’s versatility as a writer and offer an interpretation of his group and its opposition to literary modernism. This extensive publication of his letters will fascinate fans of horror fiction, for whom Machen is an early classic, and scholars of fantasy, science fiction, and literature in general. Book collectors and historians of bookselling and collecting also will find much of interest here.

Donald M. Hassler is Professor of English at Kent State University. He was educated at Williams College and Columbia University where he wrote his dissertation on the poems of Erasmus Darwin. He was a member of the Ohio Poets Association and has published many poems in their anthologies.   Two books came out of his dissertation work on Erasmus Darwin, and he published many essays on 18th-century British literature.  His first book on modern science fiction is titled Comic Tones in Science Fiction (1982). He received the Eaton Award for the best critical book on science fiction published in 1991 for his book on Isaac Asimov from that year. As co-editor with Clyde Wilcox, he has published two collections of essays on politics and science fiction, one in 1997 and the second in 2008. Working with his wife Sue Strong Hassler, he did archival work and published a selection of letters by the Welsh fantasist Arthur Machen. For nearly two decades concluding in 2007, Hassler was the prime editor of the journal Extrapolation, devoted to academic work on science fiction and fantasy.