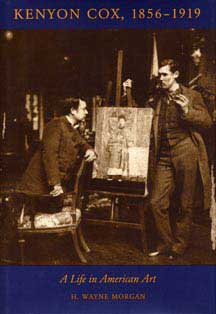 A Life in American Art

Kenyon Cox was among the best-know cultural figures in the United States during the first two decades of this century, thanks to his reputation as a mural painter and especially as a critic. In this first biography, H. Wayne Morgan focuses on Cox’s development and personality, treating his art as an expression of his idealism. Cox was born in Warren, Ohio grew up in the Cincinnati area, and attended the McMicken School of Design there. His art training continued in Paris, where he studied for five years in the academic setting of the Ecole des Beaux-Arts as well as in private ateliers, such as those of Emile Carolus-Duran, Rodolphe Julian, and Jean-Leon Gerome. An academic, Cox was committed to learning traditional drawing and composition before establishing his own artistic identity. Cox became well known as a muralist during the prosperous years from 1897 to the 1920s, providing works for the new state capitols of Wisconsin, Iowa, and Minnesota, the Library of Congress, and several public buildings in New York City. His large allegorical decorations rested on a thorough knowledge of Italian renaissance masters, many of whose works he had seen as an impressionable student. In addition, Cox’s gift for pithy phrases and his obvious knowledge gained him considerable prominence as a critic and reviewer. Throughout his career, he emphasized the values of craftsmanship and of attachments to ongoing traditional ideals that emphasized harmony, order, and unity of artist and public. He became famous, or notorious, and an outspoken opponent of the trend toward modernism, which he believed glorified individual expression at the expense of communicating with an audience. Cox saw this as culturally divisive, destroying the power of art to expand the viewer’s imagination and consciousness. Eventually, however, modernism overcame the traditional ideals and styles that Cox and many of his contemporaries had represented. Morgan’s sources include the Cox papers at the Avery Library of Columbia University as well as his voluminous published writings on criticism and art history—Old Masters and New: Essays in Art Criticism (1905), Painters and Sculptors (1907), The Classic Point of View (1911), Artist and Public (1914), and Concerning Painting: Considerations Theoretical and Historical (1917). His re-evaluation of Kenyon Cox and his classical/idealistic style contributes to the growing body of scholarship on the non-modern art of the late 19th and early 20th centuries.