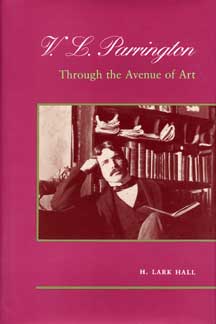 Through the Avenue of Art

“Consciously I was neither radical nor conservative, and yet my reading was drawing me inevitably out of the narrower field of polite literature into the new world of social thought that was rising about me. Carlyle, Ruskin, Morris became increasingly my teachers-above all others Morris. I have always been a rebel, I think, but with the bias of my training in art and letters I must enter the field of radicalism through such an avenue if at all. My economics must be sugar-coated for me. Shelley ought to have aroused me, or William Blake; but they did not. And it was not till William Morris came with the charm of his prose style that I was shaken out of the lethargy of the cultural. To enter the field of modern social thought through the avenue of art may seem strange to a younger generation; but it was a common experience in days when Ruskin and Morris were prophets to a world content with its smug Manchesterism.” -Vernon Louis Parrington (1918)

H. Lark Hall presents the first comprehensive biography of Vernon Louis Parrington (1871-1929). The recipient of the 1928 Pulitzer Prize in history for the first two volumes of his Main Currents in American Thought (3 vols., 1927, 1930), Parrington remains one of the most influential literary and historical scholars of the early 20th century.

Parrington was a man in search of a personal myth. He found his self-image successively mirrored in Victorian novels, painting, poetry, Populism, religion, the arts and crafts movement, American literature, and American history. These changes also were reflected in his teaching as a professor of English at the College of Emporia, the University of Oklahoma, and the University of Washington.  Published late in his career, Main Currents represented the culmination of his search.

Drawing upon previously inaccessible personal papers-including correspondence, diaries, Harvard student course work, Main Currents chapter drafts, and other unpublished writings–Hall traces Parrington’s intellectual development from his midwestern childhood through a midlife engagement with English poet and artist William Morris, then from the radical impact of “the new history” to the tempered postwar reflection of his late career at the University of Washington.  Her reinterpretation of Main Currents emphasizes Parrington’s concern with the drama of the life of the mind and links his historical viewpoint to his own personal history.