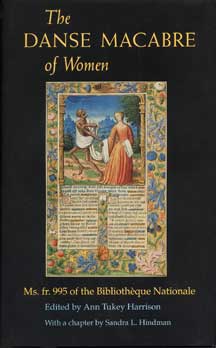 The Danse Macabre of Women

Ms. fr. 995 of the Bibliotheque Nationale

The Danse Macabre of Women is a 15th-century French poem found in a lavishly illuminated late medieval manuscript.  The only Dance of Death devoted entirely to women, it was written by an anonymous author and subsequently expanded by several poet/editors.  In this version, one of the later productions, 36 women are called in the midst of their bustling daily lives to join the eternal Dance of Death.  Young and old, rich and poor, widow, matron, and child—each is the focus of two short poelms written in the form of a dialogue (Death calls and the victim replies) and accompanied by an illumination (or a miniature).

The combined text and illumination forms a valuable social document describing these Parisian women and their preoccupations, pleasures, and attitudes toward death and the life they are leaving.  The manuscript thus affords an occasion for social, historical, and anthropological insight.  Because it post-dates the popular printed editions published by Guyot Marchant in Paris beginning in 1486, it also offers an opportunity to study the dynamic interactions between manuscript and print, between popular and high culture, in the early years of the Renaissance.

The book contains reproductions of each manuscript folio, five in full color, a transliteration and translation into English of the text (on facing pages), and explanatory chapters by Ann Tukey Harrison and by art historian Sandra L. Hindman.