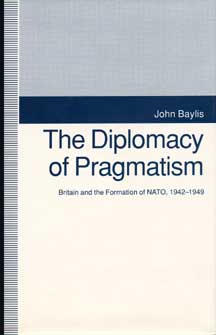 The Diplomacy of Pragmatism

The Diplomacy of Pragmatism sets Britain’s role in the formation of NATO, not in the context of orthodox, revisionist or post-revisionist approaches to the Cold War, but in terms of what has become known as “depolarization.” This approach emphasizes the distinctive and leading roles of other countries, apart from the Soviet Union and the United States, in the early Cold War period.

In focusing on Britain’s role there is no attempt to be chauvinistic. The key role of other states in the formation of NATO is acknowledged. Britain certainly did not establish NATO single-handedly. Nor was British diplomacy wholly consistent or completely successful throughout ther period covered. Different strands of policy, focusing on the United States, Europe and a “Third Power” global role, struggled for pre-eminence. Foreign policy and global strategy were not always well-coordinated.

Nevertheless, despite the failures, it is argued that Ernest Bevin, the British Foreign Secretary, made a decisive contribution to postwar diplomacy by his pragmatic and patient attempts to coordinate the policies of Western European states together with the United States and Canada. By 1949, a new system of European security had been developed in the context of rapidly changing domestic and international events. The author argues that, despite the differences, there are important lessons to be learned from postwar diplomacy by today’s statesmen as they struggle to build another new European security system in the post-Cold War era.