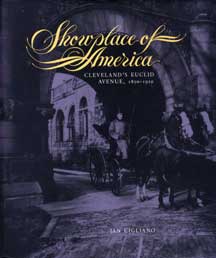 Euclid Avenue, which runs through the heart of downtown Cleveland, was for 60 years one of the finest residential streets of any city in 19th century America.  Showplace of America is the fascinating account of the rise and fall of this elegant promenade, including portrayals of the eminent architects who created its opulent residences and colorful details about the lives of the wealthy people who occupied them.

The families who resided within this linear, four-mile neighborhood epitomized Midwestern grandeur in the second half of the 19th century.  The 1893 Baedeker’s travel guide to the United States labeled it “one of the most beautiful residence-streets in America,” as others hailed it “Millionaires’ Row,” the finest avenue in the west, and the most beautiful street in the world.”

Modeled after the grand boulevards of Europe, this magnificent neighborhood was distinguished for the prominence of its architects as well as the families who lived there.  Local architects Jonathan Goldsmith, Charles W. Heard, Levi T. Scofield, Charles F. Schweinfurth, and Coburn & Barnum and national firms Peabody & Stearns and McKim, Mead & White created houses that were stunning monuments to Cleveland and America’s growing prosperity.

Ironically, the tremendous success of Cleveland’s industry and commerce, which had nurtured the rise of this grand avenue, fostered its fall.  Downtown commerce expanded along the avenue at the sacrifice of its leading entrepreneurs’ residential have.  The houses were demolished as the avenue became what is today—a neglected urban thoroughfare.  Photographs and illustrations from the archives of the Western Reserve Historical Society and other repositories are published here for the first time, documenting both the glory and decline of the “showplace of America.”