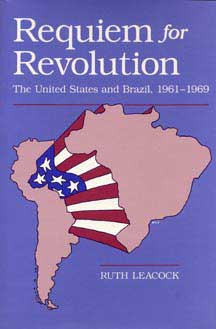 “Let us once again transform the American continent into a vast crucible of revolutionary ideas and efforts…” urged President John F. Kennedy on March 13, 1961.  “Let us once again awaken our American revolution until it guides the struggle of people everywhere—not with an imperialism of force or fear, but the rule of courage and freedom and hope for the future of man.”

Similar calls stirred Latin America.  In Brazil, it came from left-wing politicians, intellectuals, labor leaders, and students.  The revolution on April Fool’s Day, 1964 was not exactly the one the Brazilian Left had sought.  Nor was the uncontested military coup the victory of courage and freedom and hope that Kennedy had called for.  Still, it did bear an American and notably anticommunist imprint.  Kennedy had pressed his aides to define a new doctrine called for covert operations to get conservative anticommunists elected to the Brazilian Congress, to arm and train anticommunist guerrillas, and to mobilize businessmen, military officers, housewives, priests, and students in an anticommunist crusade.  Simultaneously there was to be overt pressure on the Brazilian government by State Department officials and by special White House emissaries.  When the suspect Brazilian president was overthrown by the military, Washington hastily embraced the new regime.  Generous support for the dictatorship continued for the remainder of the 1960s, despite the regime’s use of torture and terrorist death squads and its systematic deprivation of the civil and political rights of its citizens.  The pattern did not have to be reinvented for Central American in the 1980s.