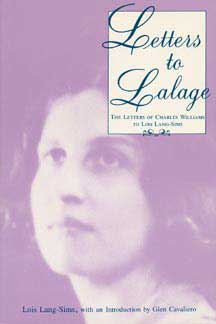 The Letters of Charles Williams to Lois Lang-Sims

The short-lived but remarkable correspondence presented in Letters to Lalage took place toward the end of Charles Williams’ life. Louis Lang-Sims was not the first young woman to seek his help or to fall beneath his spell. When she wrote to him in September 1943 Williams had already had numerous admirers, pupils, and disciples who looked to him for counsel, for advice, and most especially, for encouragement. His affinity with Louis Lang-Sims was not surprising. Some thirty years younger than he was, she was in due course herself to become a forceful and individual writer whose literary output, though relatively small, was almost as varied as Williams’ own. In Lois Lang-Sims’ writings, as in those of Charles Williams, a variety of literary forms embody a singleness of imaginative vision. But at the time of their first meeting she was only twenty-six years old and, according to her autobiographical a Time to be Born, in a state of great mental and emotional confusion. Now, nearly fifty years later, she presents the letters Williams wrote to her, together with her own comments on a relationship that was to come to such an abrupt, and in some respects disturbing, end. The intense demands of Williams’ mental and imaginative life did not permit him to be readily or relaxingly gregarious, though in whatever company he happened to be, for example as part of the Inklings group at Oxford, he was a powerful presence. Letters to Lalage enables us to study his involvement in one particular relationship with one particular person. As such they form an invaluable supplement to the more general accounts of Williams’ life supplied by his biographers. As a writer Williams blends to a remarkable degree those seemingly contradictory characteristics of impersonality and mannered idiosyncrasy which were features of his daily bearing. We see here something of the hypnotic quality of Charles Williams’ character and may obtain from it a deep if glancing insight into his extremely vulnerable humanity. At times a painful document, Letters to Lalage is of the greatest value in illuminating some of the more troubled aspects of a Christian writer and teacher who, more convincingly than most, could evoke the nature of joy—and who could induce joy in other people, however precariously he may have been aware of it himself. Most especially this book gives one an insight into the price Charles Williams paid (and unwittingly exacted) for his particular gifts and vision.