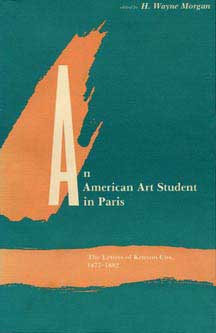 An American Art Student in Paris

Kenyon Cox (1856-1919) studied painting in Paris from the fall of 1877 to the fall of 1882.  These edited letters, written to his parents in Ohio, describe Cox’s daily routine and explicate French art teaching both in the academic setting of the Ecole des Beaux-Arts and in private ateliers, such as those of Emile Carolus-Duran and Rodolphe Julian.  The letters are important for insight into this system and into Paris art student life in general.  Cox was an academic, committed to learning traditional drawing and composition before establishing his own artistic identity.  Most of the students who crowded the ateliers and academics of Paris shared this view, and Cox’s experiences and opinions, often pungently expressed, were thus more typical of this great majority than were those of experimenters such as the impressionists, who were gaining notice while Cox was in Paris.  He commented frequently on current fads, fancies, and serious developments in the art world during this transitional period.

Cox also described his life and travels outside the academy.  These letters are a valuable commentary on the culture of late nineteeth-century Europe.  He reported on concerts, operas, plays, paintings, and literature, and the varied kinds of life—the look of the land, towns, buildings, and people—he encountered during his summer travels to the Seine valley, northern Italy, and the artist colony in Grez, south of Paris.

Art critics, historians, and collectors of traditional and academic art of this period will find this book the beginnings of the traditionalist view for which Cox later became famous.  In addition, the letters are an often moving chapter in the development of an intellectually precocious young man from the American Midwest who was determined to become a painter with ideas as well as skill.