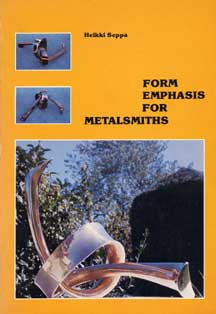 Redefines the vocabulary of metalsmithing. In print for more than three decades. A master artist and teacher of metalwork presents a bold new approach to creative expression in metal. Believing that the time has come for the artist to free himself from the functional forms that have dominated the metal smith’s craft—the cup, the box, the pitcher, etc.—Heikki Seppa urges the craftsman to create in terms of pure form, and in this book he shows him how. Two Things are essential. The first is a thorough understanding of the special properties of metal as an artistic medium and an intimate knowledge of techniques for working it. Only when he has mastered the physical means of working with metal can the artist free his imagination for unimpeded creation. Though not addressed to the beginner, Seppa discusses the fundamental techniques of planishing, soldering, and hinging—all the basic means by which metal is shaped. The second is to free the artist from thinking in terms of function, since this limits his concepts of what can be created. Even such traditional forms as the cube, the cone, the cylinder, and the dome have their limitations, and Seppa opens new possibilities by creating a new vocabulary, new terms by which to identify the many shapes metal can take under skilled hands. A major feature of this book is an extensive glossary of these terms, each one illustrated with a sketch by the author. The book is profusely illustrated throughout with the author’s own sketches of the ideas and techniques discussed. It will be of significant value to the accomplished craftsman as well as to teachers and advanced students of this exciting and growing art form. The artistic metal creations of Heikki Seppa have won international acclaim, from his award of master status in silversmithing from the Ministry of Education in his native Finland to numerous exhibits and awards here and abroad. As a teacher of metalsmithing in the School of Fine Arts of Washington University, Mr. Seppa’s work with young artists led to the formulation of the new approach to creativity in metal that he details in this book.

One of the most innovative and influential silversmiths of the latter 20th century, the late Heikki Seppä helped introduce the technique of reticulation to the United States while also developing and popularizing new methods for shaping sheet metal into three-dimensional shell structures. His own works are notable for their use of bold sculptural forms — Seppä insisted that silver could be an expressive, rather than merely utilitarian, medium — and for combining silver and gold with other metals to create striking contrasts and color blends. Born in Säkkijärvi, Finland, in 1927, Seppä studied at the Goldsmith School of Helsinki and the Central School of Industrial Art in Helsinki. He continued his professional training in 1948-49 with George Jensen Silversmiths in Copenhagen, Denmark, and two years later emigrated to British Columbia, Canada, where he taught jewelry and metalsmithing at the Civic Center in Prince Rupert. Seppä died in 2010.