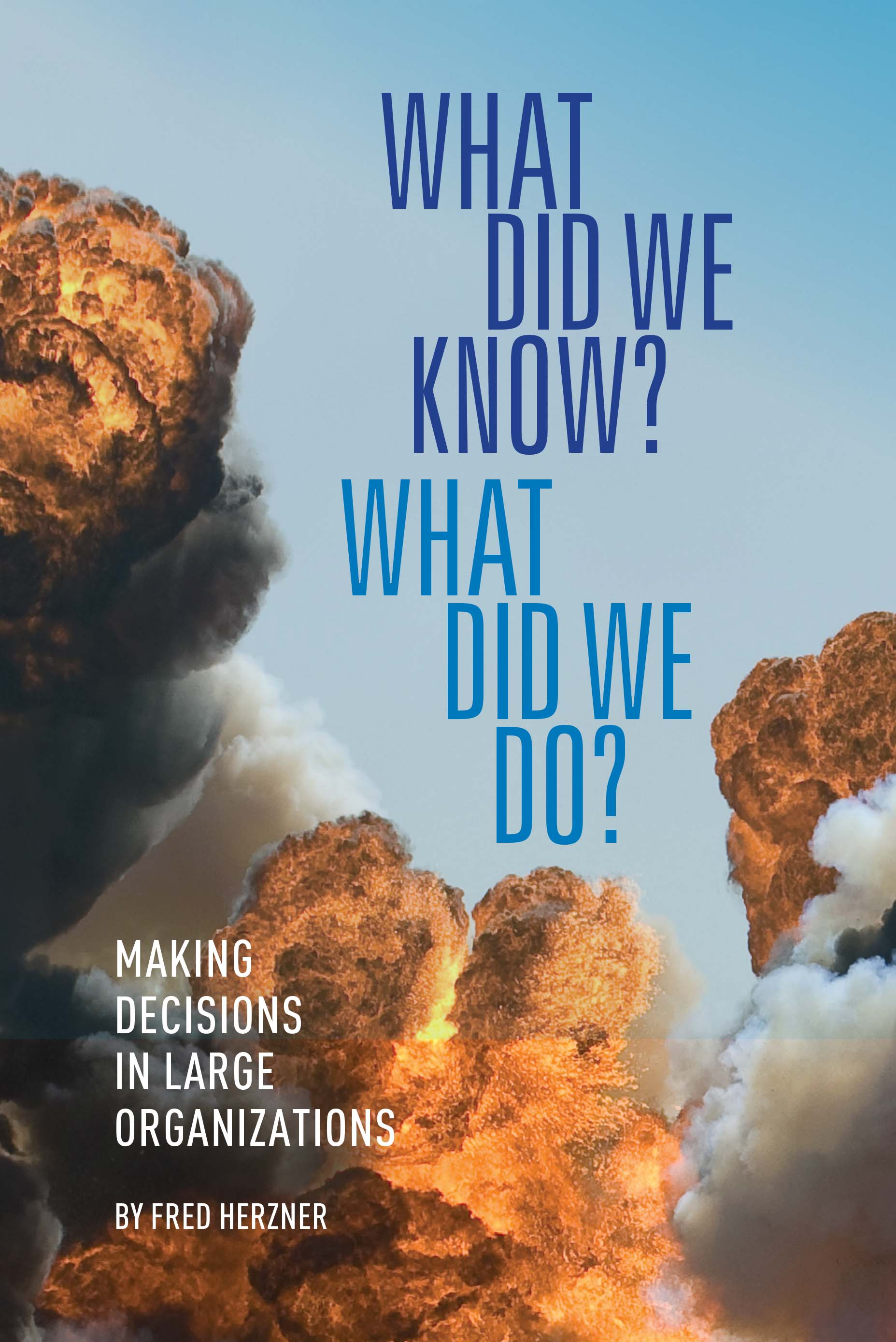 In July 1989, United Airlines Flight 232 crashed in Sioux City, Iowa. One hundred and eleven people lost their lives and numerous others were seriously injured.The accident was initiated by a small metallurgical defect in an engine rotating part. That engine was manufactured by General Electric Aircraft Engines.

When Fred Herzner learned of the fateful crash, he immediately had a suspicion that a problem he had been working on as a member of the GE engineering team may have initiated the event. When it was confirmed, Herzner questioned what he and the others might have done to break the chain of events that led to the accident. This led him on a quest to understand how decisions get made in large organizations and develop principles which could be used to help large organizations avoid being involved in events which might threaten people's lives and have grave consequences for both the organization and the people inthem.

In What Did We Know? What Did We Do? Making decisions in large organizations, Herzner shares his personal experience and uses other major disasters, such as the BP oil spill and Flint, Michigan water crisis as a means to benchmark his principles. He explains how values and culture influence the decision process and how individuals interact with the organization, and vice versa.

And, Herzner challenges readers to learn from these painful lessons and implement a new set of behaviors which, hopefully, will keep such devastating events from happening again.

Dustin Scott Klein is an award-winning business journalist, bestselling author, and the publisher and COO of Smart Business, a regional media company that publishes management journals, produces live events, manages digital properties, and operates a book development and publishing house—all designed to deliver insight, advice and strategy for senior executives. Over the past 25 years, he has interviewed thousands of business and civic leaders, and helped nearly 50 CEOs and entrepreneurs transform their ideas into books. Dustin has edited or co-written more than two dozen books, including six Amazon bestsellers: The Unexpected, Manufacturing with Heart, 5 Fundamentals to Unleash Millennial Talent, Limping on Water, and the two Amazon #1 bestsellers Undaunted and The Benevolent Dictator.

Fred Herzner is the retired chief engineer of General Electric Aircraft Engines, a position he held from 1995 to 2003. Fred had responsibility for assuring that the engineering design processes reflected the best practices of the business, managing the flight safety organization, and serving as liaison between the aircraft engine business and various industry groups and regulatory agencies. Fred was instrumental in formulating and implementing GE’s policy on how to identify and address issues which could potentially have flight safety implications.

Over his distinguished career, Fred contributed to numerous military and commercial engine programs, including the B1-B Bomber, the F-16 and F-15 Fighters, the MD-11 and B-737, among others. His contributions to the aircraft engines business have been recognized with the Perry T. Egbert award for engineering excellence and induction into GE Aviation’s Hall of Fame. He also holds several patents.

A licensed pilot with instrument and commercial ratings, Fred earned a bachelor’s degree in aerospace engineering and a master’s degree in applied mechanics from The Polytechnic Institute of Brooklyn. He has been involved in all phases of aviation from building model airplanes to owning, building, and flying his own airplanes all over the country.