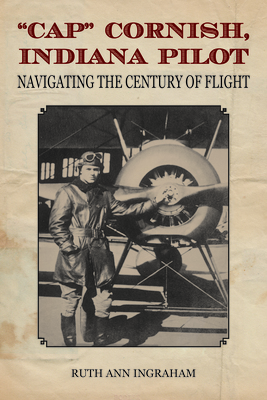 Navigating the Century of Flight

Clarence "Cap" Cornish was an Indiana pilot whose life spanned all but five years of the Century of Flight. Born in Canada in 1898, Cornish grew up in Fort Wayne, Indiana. He began flying at the age of nineteen, piloting a "Jenny" aircraft during World War I, and continued to fly for the next seventy-eight years. In 1995, at the age of ninety-seven, he was recognized by Guinness World Records as the world's oldest actively flying pilot.The mid-1920s to the mid-1950s were Cornish's most active years in aviation. During that period, sod runways gave way to asphalt and concrete; navigation evolved from the iron rail compass to radar; runways that once had been outlined at night with cans of oil topped off with flaming gasoline now shimmered with multicolored electric lights; instead of being crammed next to mailbags in open-air cockpits, passengers sat comfortably in streamlined, pressurized cabins. In the early phase of that era, Cornish performed aerobatics and won air races. He went on to run a full-service flying business, served as chief pilot for the Fort Wayne News-Sentinel, managed the city's municipal airport, helped monitor and maintain safe skies above the continental United States during World War II, and directed Indiana's first Aeronautics Commission.Dedicating his life to flight and its many ramifications, Cornish helped guide the sensible development of aviation as it grew from infancy to maturity. Through his many personal experiences, the story of flight nationally is played out.

Ruth Ann Ingraham, born in Fort Wayne, Indiana, has a BS degree in French and political science from Purdue University. A naturalist and native plant advocate, she is the author of the memoir Swimming with Frogs: Life in the Brown County Hills (Indiana University Press, 2005), which interweaves observations of nature with reflections on life and love. She is cofounder of the Indiana Native Plant and Wildflower Society and the Brown County Native Woodlands Project, and she is involved in the Indianapolis Woman’s Club, a literary organization founded in 1875, in which active members biannually write and read papers on topics of their choosing.