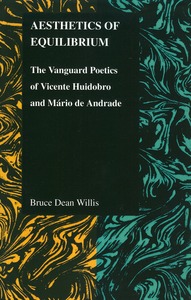 The Vanguard Poetics of Vicente Huidobro and Mario de Andrade

Bruce Dean Willis received his M.A. in 1992 and Ph.D. from the University of Virginia in 1996. He teaches Spanish American Literature and Cultures on Portuguese languages at the University of Tulsa. He has published articles and chapters on poets and edited Essays on Hispanic and Luso-Brazilian Literature and Film in Memory of Dr. Howard M. Fraser.