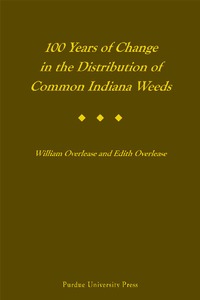 100 Years of Change in the Distribution of Common Indiana Wees

This reference tracks the distribution of approximately 200 common weed species throughout Indiana's 92 counties. Each weed's distribution is shown on range maps at three times-1899, 1940, and 2004. The Overleases' compendium records the continuing expansion of weeds-aggressive plants that can move into an available habitat, across Indiana.