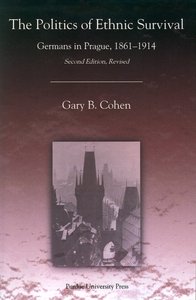 The Politics of Ethnic Survival

The German-speaking inhabitants of the Bohemian capital developed a group identification and defined themselves as a minority as they dealt with growing Czech political and economic strength in the city and with their own sharp numerical decline: in the 1910 census only seven percent of the metropolitan population claimed that they spoke primarily German. The study uses census returns, extensive police and bureaucratic records, newspaper accounts, and memoirs on local social and political life to show how the German minority and the Czech majority developed demographically and economically in relation to each other and created separate social and political lives for their group members. The study carefully traces the roles of occupation, class, religion, and political ideology in the formation of German group loyalties and social solidarities.

Gary B. Cohen was educated at the University of Southern California and Princeton University. He was a member of the University of Oklahoma history faculty from 1976-2001, where he taught a range of courses on modern European social and political history and East-Central Europe in the nineteenth and twentieth centuries. In August 2001, he became director of the Center of Austrian Studies, executive editor for The Austrian History Yearbook, and professor of history at the University of Minnesota, Twin Cities.