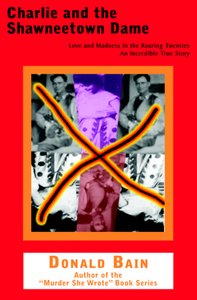 Charlie and the Shawneetown Dame

Love and Madness in the Roaring Twenties

Charlie and the Shawneetown Dame, based on a true story, recounts one of the most famous turf wars waged during the madness called Prohibition. The outsized ambition of Charlie Birger – a flamboyant, slightly mad Al Capone wannabe – brought him from New York to southern Illinois in search of fortune as a bootlegger. However, Birger soon found that his dream of grandeur faced a few hurdles – including the vicious Shelton Brothers and Helen Holbrook, a beautiful, alcoholic socialite from Shawneetown, whose simultaneous affairs with Birger and Carl Shelton fueled a bloody and bizarre gang war.

Donald Bain vividly captures turbulent Southern Illinois during the Roaring Twenties, while deftly chronicling Birger’s journey from charismatic leader to beleaguered general in the harsh reality of hand-to-hand combat, and ending with his demise as a dupe to a far cleverer enemy. Ultimately done in by the “Shawneetown Dame;” his own inflated ego; and by a sly sheriff named Pritchars, who conned Birger into jail, allowing the area’s most famous gangster to bring his sub-machine gun into the cell with him – Charlie and his story are a fascinating piece of Americana – crude, violent, yet often humorous. Replete with homemade tank battles and crude bombings from an open cockpit aircraft, Bain himself considers this rapid, riveting read to be his best book.

Donald Bain is the author or ghostwriter of more than 80 books, including the best selling Murder, She Wrote series of original murder mystery novels based upon the popular show. His books include mysteries, comedies, investigative journalism, westerns, biographies, historical romances, and Mafia novels. He lectures frequesntly and is a popular guest on radio and TV talk shows.