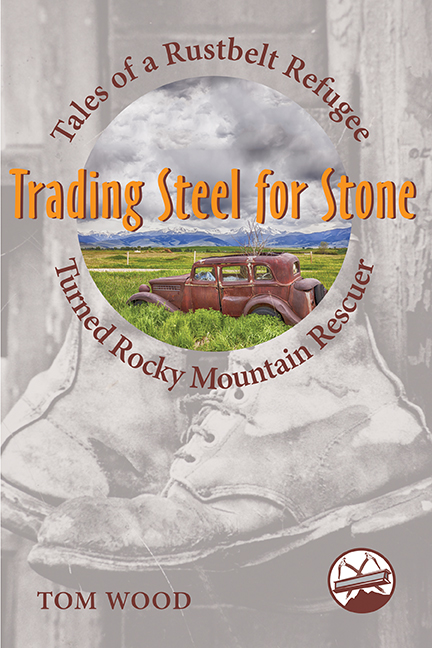 When the author began his career as a volunteer mountain rescuer with the Alpine Rescue Team in Colorado seventeen years ago, he was a clueless Youngstowner fresh off the interstate from Ohio who didn't know Gore-Tex from Tex-Mex. He had a lifetime of ridiculously dangerous pursuits and backcountry sins to atone for, so he became a Rocky Mountain rescuer with the intention of repaying the massive karmic debt he had accumulated. This is the story of how a career in volunteer service to others transformed a self-absorbed Rustbelt redneck adrenaline junkie into one of the nation's leading voices in technical rope rescue.

Tom Wood is the Field Director of the Alpine Rescue Team in Evergreen, Colorado (one of the busiest non-paid professional mountain rescue teams in the country), and writes curriculum and teaches industrial rope rescue and safety to cell tower climbers, wind turbine workers, and just about anyone else who wears a harness and works at heigh, for Vertical Rescue Solutions by PMI. A regular speaker and presenter for the Mountain Rescue Association, the National Association for Search an dRescue, and the International Technical Rescue Symposium, he is also a U.S. Delegate for Terrestrial Rescue to the International Commission for Alpine Rescue. He presently serves as the chair of the Safety Reporting Committee for both the Mountain Rescue Association and the Society of Professional Rope Access Technicians. A 1990 graduate of Kent State University’s photojournalism program, he served as a Combat Photographer for the United States Marine Corps Reserve. He lives at an elevation of 8,500 feet in the foothills west of Denver in a house that is much too small for a family of five with two cats and two turtles.