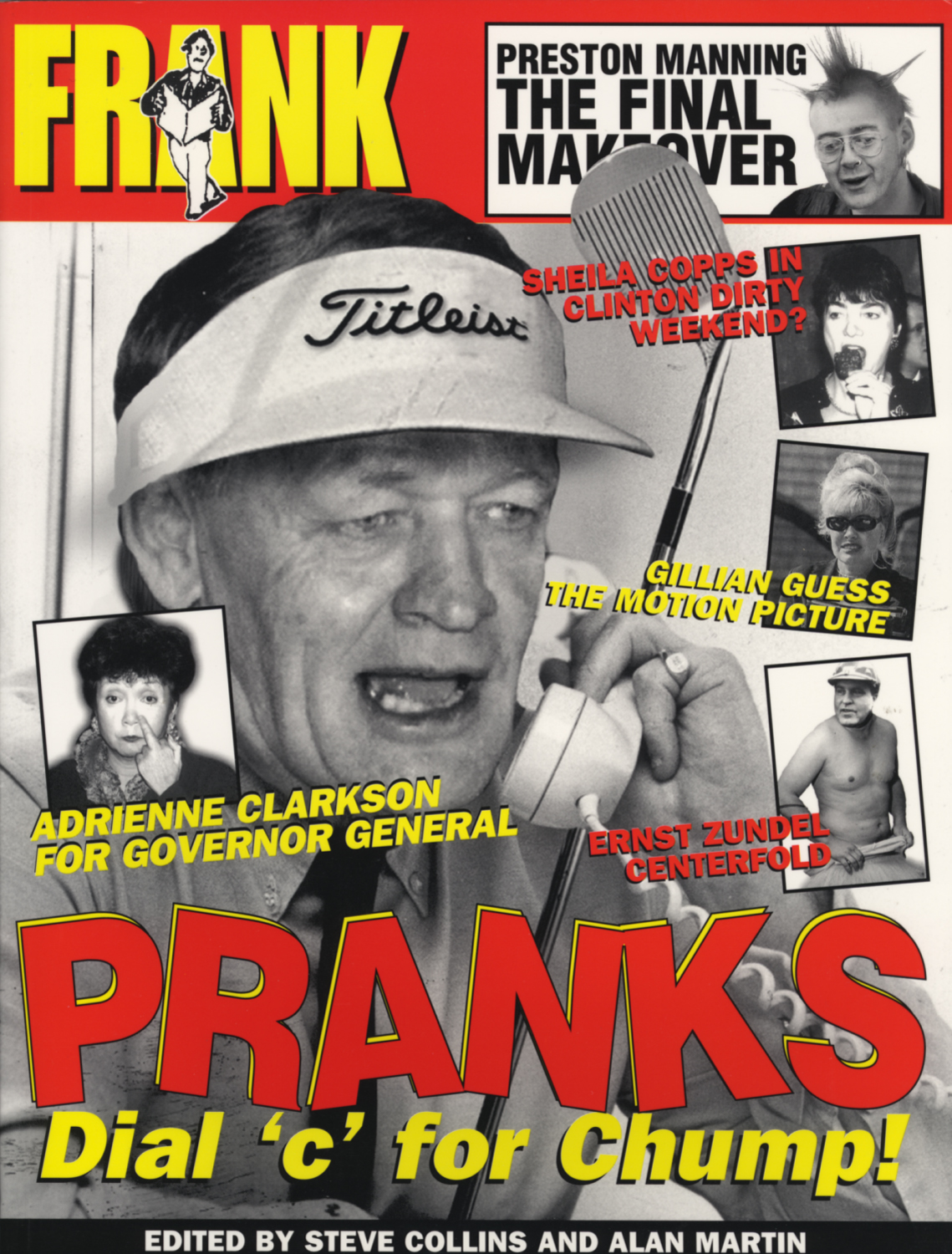 Irreverent but never irrelevant, Frank Pranks at last makes the big leap to swanky book form. FRANK is Canada’s premier (okay, only) satirical news magazine. Irreverent and iconoclastic, the Ottawa-based FRANK dares to tell the stories the mainstream media can’t or won’t report. Every two weeks, it serves up the hottest gossip about Canadian politics, government, business, entertainment, and media. Required reading for politicos, talking heads, and news junkies, FRANK has monthly sales of nearly 50,000. Among the editors’ most cruel and unusual instruments of satirical torture is the FRANK Prank, in which FRANK operatives concoct a wildly implausible cover story, dial up their hapless victims, and set out to prove just how gullible certain Great Canadianstm really are. The results range from the deliciously predictable (Canadian Alliance stalwarts are apoplectic when told that Ottawa is secretly donating Zambonis to the fictitious African country of Chapati) to the surprisingly educational (FRANK canvasses the cronies and former cabinet ministers of deposed Prime Minister Brian Mulroney for an ?Airbus” defence fund. Total pledged? Fifty dollars.) But few FRANK ?prankees” have topped the performance of member of Parliament Lorne Nystrom (ndp?Regina-Qu’Appelle). Posing as a reporter from the Globe and Mail, a FRANK employee reeled Nystrom in with a yarn about a government grant to press baron and House-of-Lords-wannabe Conrad Black for a course in heraldry at the (ahem) Cleese Institute in London, England: accusations, denials, and writs followed. Here at last are the unexpurgated, full-length renderings of some of FRANK’s most audacious, revealing, and heartless phone pranks ? featuring such notables as Pierre Berton, Her Excellency Adrienne Clarkson, Sheila Copps, Allan Fotheringham, Michael Moriarty, Farley Mowat, Rita McNeil, Lloyd Robertson, William Thorsell, Ken Whyte, Elwy Yost, and most of the membership of the Reform Party/Canadian Alliance ? collected and preserved in a lovely keepsake volume that will undoubtedly stand the test of time better than its cast of characters.

STEVE COLLINS is Managing Editor of FRANK magazine. He has cashed cheques from the Pembroke Observer, the Kingston Whig-Standard, CBC Radio, and 22Online. He lives in Ottawa. ALAN MARTIN is Associate Editor of FRANK magazine. Before joining the gutter press, he worked as a journalist in England, South Africa, and, er, Sudbury. He lives in Ottawa with his partner Moya and dog, Biko.