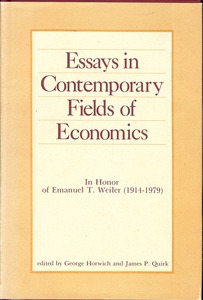 Essays in Contemporary Fields of Economics

This volume honors Emanuel T. Weiler, the founder and first dean of Purdue University's School of Management and of the Krannert Graduate School of Management. Beginning in the mid-1950s, Weiler created a unique academic environment within which innovative and lasting contributions were made to both the teaching and content of economics and management. Members of the original economics faculty recruited by Weiler as well as several of their students wrote this collection of essays. All but one of the papers were prepared expressly for the volume and have not been published previously. The essays cover diverse areas which evolved from Weiler's leadership. The work has four major topical divisions (Economic Theory, Applied Economics, Macroeconomics, and Economics Education) plus a section of four memoirs.