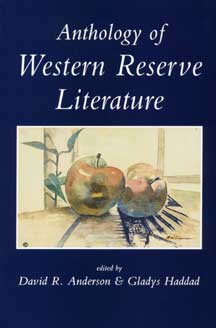 The story of the history and culture of a people is often told through regional literature. Anthology of Western Reserve Literature, funded in part by the National Endowment for the Humanities and the Ohio Historical Society through the American Association of State and Local History, broadly represents the variety of literary genres and ethnic and economic pluralism of northeast Ohio over a 180-year period. The first collection of its kind devoted solely to Ohio literature; it supports pride in place and the importance of regionalism in defining American culture.

The selections include works written by people who were born or lived in the Western Reserve, whose writings reflect an interest in the region, or who portray a particular aspect of the area, such as landscape, demography, or historic events. James Garfield, William Dean Howells, Clarence Darrow, Langston Hughes, Kenneth Patchen, Sherwood Anderson, Hart Crane, Herbert Gold, d.a. levy, and Rita Dove are among those represented here.

The work is organized by century to give a sense of the literature that was typical for both the region and the time. The 19th-century selections include letters, diaries and journals, fiction, and poetry, while those from the 20th century focus on memoirs and autobiographies in addition to fiction and poetry, much of which reflects the growth and dominance of Cleveland.

Historians of Ohio and the Western Reserve will find this collection valuable, as will scholars of American Studies and 19th- and 20th-century American literature, particularly specialists in regional literature. Ohioana enthusiasts will also consider this anthology essential reading.

David R. Anderson, professor of English at Hiram College, has a B.A. from Hiram College, M.A. from the the University of California at Berkeley, and Ph.D. from Case Western Reserve University. He has written extensively on regional literature and architecture.